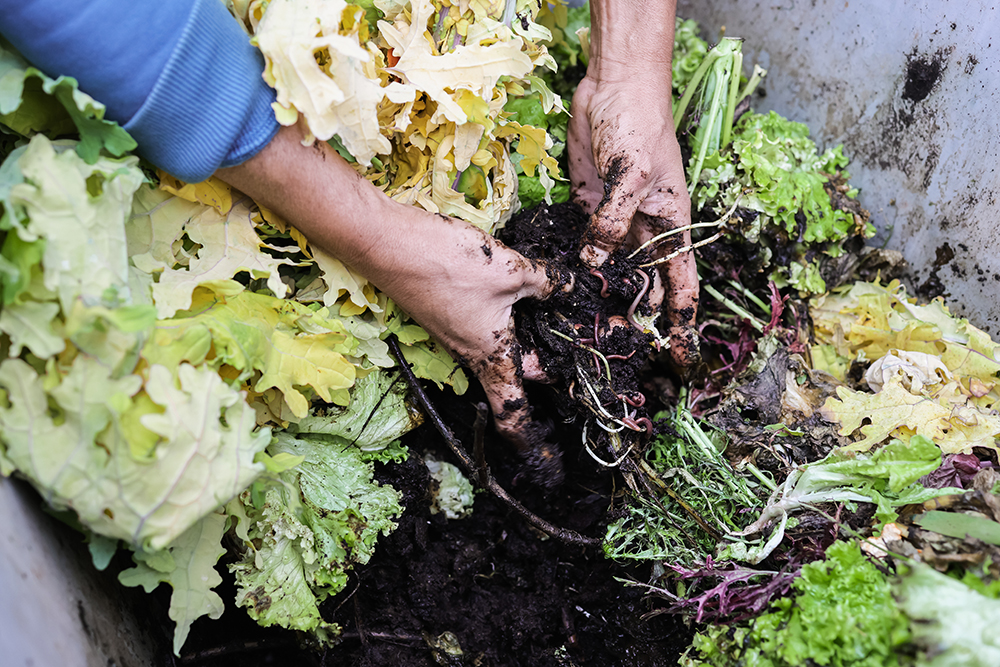 After your worms have settled in for about a week, you can add a fresh food layer. This starts your regular weekly feeding routine.

Regular feeding is recommended, but if you need to skip a few days, they will do fine.

Rule of thumb: it’s always better to under-feed than to over-feed. Over-feeding can result in serious problems.

As the worms churn through the material, they have a mixing and leveling effect. A smooth surface appearance is a good indicator that they have completely worked through the prior feeding and it is ok to feed again.

Fresh food scraps or green yard waste will heat up when put directly in the bin. So, it is highly recommended to mix these with some browns and pre-compost it.

Just keep an eye out that the previous layer of feedstock has been processed well enough before adding more. If you’re not sure, wait a day or two longer before feeding again.

Just to be safe, check the temperature of the top 8 inches occasionally to be sure it’s not much above room temperature.

‘Pre-composting’ is a technique to partially break down the feedstock material before feeding to worms. Pre-composting is considered essential for most commercial CFT vermicomposters.

Conventional aerobic composting consists of three stages, often referred to as thermophilic, mesophilic, and curing. Pre-composting consists of only the first thermophilic stage, where the microbial activity generates internal pile temperatures above 135°F for a minimum of 3 days. This destroys pathogens and viable seeds and burns off much of the nitrogen so later heating is avoided.

The vermicomposting process itself replaces the mesophilic and curing stages. After a brief cooling down, it is immediately ready to feed to the worms.

Pre-composted or lightly aged manure is a good staple food source for vermicomposting. It has a perfect balance of carbon and nitrogen so nothing else need be added. And it already has a healthy population of microbes working through the material. Aged horse manure is one of the easiest to work with.

Fresh manures have higher amounts of urine and salts, so it’s best it they are left some time out in the rain. Select manure that has been outdoors for a while, already starting to break down.

Keep in mind that any seeds in manure will still be viable if it hasn’t been hot composted.

Also, some manures like cattle manure are likely to contain pathogens – like E. coli, one of the fecal coliforms that are harmful to humans. Take care when handling manure-based materials, wear gloves and wash well.

Food scraps are an increasingly popular source for feedstock due to municipalities’ need to reduce organics in their landfills, and the wish of organizations to follow sustainable practices. But they can be more difficult to manage successfully in vermicomposting.

Pre-consumer food waste is easiest to control. Besides fruits and vegetables, smaller quantities of grains, coffee grounds, and plant proteins are also good components in a feedstock mixture. Eggshells can be included if ground. Onions and citrus are often avoided but can be accepted in small quantities.

Meats, dairy and oils should be avoided, though some have reported bokashi-ing these and then adding to feedstock. Bokashi has a high acidity, so if you are going to try adding it, I advise that you should ease your worms into it.

Greens such as food waste or yard debris are best chopped fine to maximize the exposed surface area.

Frozen food scraps can be used which can break down faster. Do not liquify or ‘puree’.

As in any compost, ‘green’ materials must be amended with ‘brown’ materials to achieve a suitable C:N ratio. ‘Brown’ materials include carbon-rich items like shredded cardboard, dry leaves, and sawdust. Smaller particle size is best, so they can decompose at the same rate as the green waste. Large wood chips and fibrous materials are slower to break down and this will yield an inconsistent finished product.

Peat moss and coir have a high carbon content, but they are slow to break down, so their carbon is not available at a pace needed to match the nitrogen.

Large woody materials like bark chips can introduce a thriving fungal population which is desirable to balance with bacterial populations in vermicompost. These larger pieces won’t break down quickly but will inoculate the mixture, then you can screen them from the finished product and return them to the bin for multiple trips through.

Some operators have been successful with mixtures of green and brown materials without pre-composting. These will naturally heat up in the worm bin so they must be added in thin layers. The worms will feed on the layers below the surface that have already started decomposition from microbial activity.

Odors and pests can be a greater risk, but these can be managed with the right conditions. If needed, a thin layer of finished compost can be added on top of the fresh feedstock to act as a biofilter.